Fourteen people, including five children, were killed in Chicago over Father’s Day weekend, which saw more than 100 gun violence victims and was the deadliest this year.

From Friday evening to Monday morning, 104 people were shot in Chicago. Among them was three-year-old Mekay James. He was hit by a bullet on Saturday while riding in a car with his father, who was the intended target, police said.The young child was rushed to hospital but was pronounced dead shortly after.

Two teenage boys, ages 17 and 16, were killed just over an hour before James’ death, when a male suspect approached them and fired shots. Later the same day a 13-year-old girl died after being shot in the neck while watching TV in her home.

In another incident, two teen boys, 15 and 16, were fired at from a moving vehicle while they were walking. The 15-year-old was shot in his leg, chest and abdomen and was pronounced dead at the hospital. The second boy was hit in the ankle and is now in a stable condition.

The soaring deaths prompted local faith leaders to hold a meeting in order to publicly condemn the violence and to pressure the city’s police to act. Pastor Ira Acree, who organized the event, told the media “I could not pastor this community and not say something.” “A line was crossed,” he added.

Police Superintendent David Brown said that police are working on tracking down those responsible for the shootings. He added that “gangs, guns and drugs” are the common thread in those shootings.
“Good men throughout this city should be celebrating with their families on a beautiful day, but instead, a number of Chicagoans will be spending Father’s Day grieving the loss of their children,” he said at a press conference.

The spike in gun violence comes after Chicago experienced its deadliest Memorial Day weekend since 2015, with nine people killed and 27 injured in shootings.

The protests following the killing of George Floyd by a Minneapolis police officer last month have begun a nationwide conversation on defunding the police. Both Superintendent Brown and Chicago Mayor Lori Lightfoot disagree with the sentiment. After the events of this Father’s Day weekend Brown publicly stated that he believes more policing is required.

“Tears are a natural reaction to these tragic stories of violence. But we need to do more than just cry,” he said. “Let’s keep violent offenders in jail longer, and let’s revamp the home monitoring system. It’s not working.” 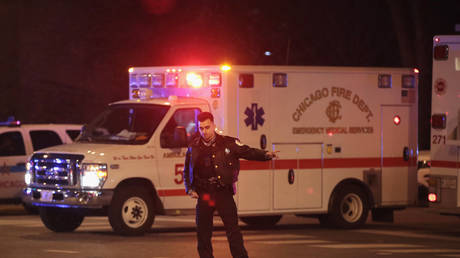