An adviser to the head of Russia’s space agency, Roscosmos, was arrested in Moscow on Tuesday on suspicion of treason. Formerly a journalist, Ivan Safronov only took up his new role two months ago.

According to Russia’s Federal Security Service, the FSB, Safronov is accused of working for a foreign intelligence agency, and passing secret information about military technology and the Russian defense industry to an unspecified NATO country.

According to Roscosmos, his arrest does not concern his current work. Meanwhile, the Kremlin has indicated that it’s also not connected to his past journalism.

Earlier, media speculation linked his arrest to his previous reporting on the military-industrial complex, in particular, a story on an aircraft sale to Egypt, published in Moscow daily Kommersant.

If charged and found guilty, he faces up to 20 years in prison.

Safronov (30) has worked as a journalist for well-respected newspapers Kommersant and Vedomosti. In May, he was appointed as an adviser to Dmitry Rogozin, the director-general of Roscosmos.

Speaking to news agency TASS, Rogozin explained that Safronov “did not have access to classified information,” but said that he has known the ex-journalist for several years, and never doubted his “high professionalism and personal decency.”

Safronov left Kommersant in 2019 after writing an article about the possible resignation of Valentina Matviyenko, the head of Russia’s upper house of parliament, the Federation Council. A spokesman for the Federation Council called the piece a rumor. Following complaints by the paper’s ownership, Safronov resigned from the politics department, along with more than 10 other journalists.

“Whether I like it or not, it doesn’t matter: the publishing house has an owner, he has the right to determine who will work in his asset – Vanya Safronov or someone else,” he wrote at the time. 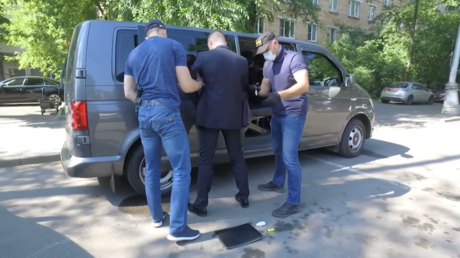