America’s 26th president, Roosevelt was also a committed naturalist and conservationist. Of all his achievements, perhaps the most lasting is his use of executive orders to place around 230 million acres of land under federal protection, paving the way for the establishment of the National Park Service in 1916. His reverence for nature was honored with a bronze statue outside the Museum of Natural History in New York in 1940.

However, with the Black Lives Matter movement tearing down statues and monuments across the country in the name of racial justice, the museum will now take ‘Teddy’ down. Calling the statue – which depicts Roosevelt on horseback flanked by a Native American and a black man – a “hurtful symbol of systemic racism,” the museum requested its removal last week. City authorities will soon comply with the request.

What, if anything, will replace the statue remains unclear. However, actor Ben Stiller said on Monday that a statue of the late comic actor Robin Williams should take its place.

How about replacing it with a statue of Robin Williams. He deserves one.

Williams’ association with the museum stems from his appearance alongside Stiller in ‘Night at the Museum’ in 2006. Ironically, Williams played a living waxwork figure of Roosevelt in the movie. The real Roosevelt, by contrast, was intimately involved with the museum since its establishment. His father signed the institution’s founding charter, and artefacts dug up by a young Theodore were among the museum’s first displays.

However, the woke police have had their sights on the statue for some time, even before the recent wave of iconoclasm swept the US. Protesters calling themselves the ‘Monument Removal Brigade’ drenched the statue in fake blood in 2017, while critics decried Roosevelt’s support of eugenics and expansionism in South America as “racist.” At the time, the city agreed to leave the statue in place, and the museum opened an exhibition on the “divisive” history of the monument.

Since the killing of George Floyd in Minnesota last month, the removal of ‘problematic’ monuments has become a national debate, and one that the removers seem to be winning. Statues of Christopher Columbus, George Washington, Robert E. Lee, and Thomas Jefferson are all among those taken down either by force or by government decision in the weeks since Floyd’s death.

President Donald Trump has vociferously opposed the wave of “statue demolition,” but has not directed federal authorities to protect any of the threatened monuments. Instead, he’s lashed out at Democrat mayors and governors for their alleged negligence on the issue. As New York Mayor Bill de Blasio cheered the museum’s decision to ax Roosevelt on Sunday, Trump called the move “ridiculous,” and urged de Blasio “don’t do it!” 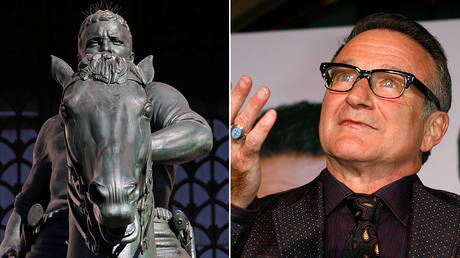