Protesters in the US capital have been spotted setting up another ‘autonomous zone’, inspired by a similar project in Seattle. Just blocks away from the president’s residence, the new encampment has been dubbed the “Black House.”

Activists were seen erecting makeshift barricades in the streets of Washington, DC on Monday evening, less than two miles away from the White House, with footage showing one protester hauling a piece of plywood labeled with the words “people’s fence” in spray paint.

#Update: More video footages of these Anarchists trying to setup a new Autonomous Zone, this time in #DC 1.2 miles away from the White house, called the “Black House Autonomous Zone #BHAZ” pic.twitter.com/kLOYVI19xs

Happened to be passing by the White House and saw this sign go up pic.twitter.com/qCF1hQUi1l

A group of protesters also gathered closer to the White House a few blocks away, where they attempted to tear down a statue honoring former President Andrew Jackson.

#BREAKING: Protesters have opened the fence surrounding the Andrew Jackson statue in Lafayette Square and have climbed on top.

I’ve heard them say they’re trying to tear it down. @wusa9 #BlackLivesMatter pic.twitter.com/i8cBlM171b

Police reinforcements were sent into the area to stop any vandalism, after footage shared online showed that demonstrators had already attached straps to the monument in a bid to bring it down. Officers appeared to use pepper spray to disperse the crowd. 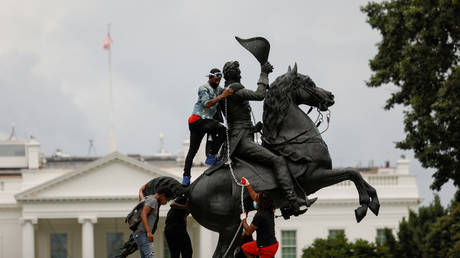