The residents of the self-declared ‘autonomous zone’ in Seattle are preparing for a showdown with police, after city officials signaled that it is time to break up the violence-plagued camp.

Photographs and videos posted to social media show demonstrators strengthening street barricades used to separate the Capitol Hill Autonomous Zone (CHAZ) from the rest of Seattle. The protesters appear to be focusing their efforts on defending a smaller area around the Seattle Police Department’s East Precinct, which they took over after law enforcement pulled out of the neighborhood.

Images from this evening as a group of protesters briefly linked arms outside the SPD East Precinct before deciding to separate and have begun moving barricades towards a smaller area around the precinct. For @reuterspictures #CHOP pic.twitter.com/aR0PlJqusb

Makeshift barricade set up now between 11th and 12th by the SPD East Precinct, basically further reducing the size of the #CHOP. There’s a couple narrow gaps that people can walk through. #seattleprotest pic.twitter.com/MR19gGQusM

Using trucks, CHAZ residents commandeered concrete barricades placed by the city, and added the giant blocks to their own defensive positions. Footage also shows demonstrators practicing the formation of a human chain – a tactic which they purportedly plan to use to block police from taking back the precinct building.

Second concrete barricade being taken from its original position in front of the East Precinct in the #CHOP up the hill. #seattleprotest pic.twitter.com/Dl1VMMSh7R

For around two weeks, protesters have occupied the six-block area and declared it a police-free zone. Although the city was initially reluctant to intervene, a string of violent incidents in CHAZ has prompted Mayor Jenny Durkan to take action. One man died and at leas two were injured after the encampment saw several shootings over 48 hours. Durkan said that she supported those who want to peacefully protest but that CHAZ (also known as the ‘Capitol Hill Occupied Protest’, or ‘CHOP’) was negatively impacting businesses and residents in the surrounding community.

Protesters here outside the SPD’s East Precinct in the #CHOP practicing a human chain to protect the building from police. #seattleprotest pic.twitter.com/MqhITSesTM

On Monday, she announced that Seattle police would be returning to the abandoned precinct, but promised that they would do so “peacefully.” She did not specify when police would move in, only that it would happen “in the near future.”

The looming showdown comes as protesters in Washington, DC attempted to create their own ‘autonomous zone’ in the nation’s capital. Fights have reportedly already broken out at the self-declared ‘Black House Autonomous Zone’ – located just a few blocks from the White House. 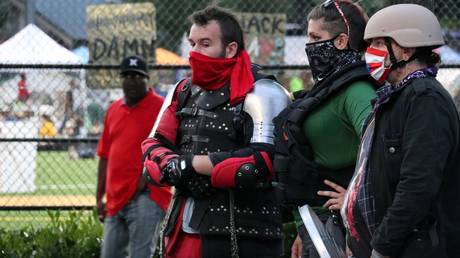