Actor Terry Crews faced an angry backlash after voicing concerns about the radicalization of the BLM movement. His clash with CNN’s Don Lemon on why black-on-black crime is not part of the agenda split society even further.

Last Saturday, Crews, who is also a human rights activist, tweeted that he saw good people as allies regardless of the color of their skin, adding that he was “prepared to die on this hill.” He previously expressed concern that the Black Lives Matter movement might slide into black supremacy.

Are all white people bad?

Are all black people good?

Knowing this reality- I stand on my decision to unite with good people, no matter the race, creed or ideology.

Given the number of threats against this decision-

I also decide to die on this hill.

On Monday, Crews spoke about his position and the backlash he faced over it on Don Lemon’s CNN program. The two men clashed over whether violence against black people perpetrated by black people should be part of the issues tackled by BLM.

The BLM protests are being steered towards a racially charged antagonistic approach, Crews believes, and people like him are being pushed out of it.

“Black people who are talking about working with whites and other races are viewed as sell-outs. They are called ‘uncle toms,’” he said.

Someone wants to control the narrative.

He added that the arrogance which drives the radical part of BLM was dangerous for the BLM cause as a whole, because a civil rights movement without a non-racial component will only brew resentment. And ultimately, black supremacism results in black people trading one oppressor for another.

“Black people need to hold black people accountable. This is black America’s version of the #MeToo movement,” he said.

For example, black-on-black violence is something that BLM leaders don’t want to touch. Meanwhile, there are black neighborhoods that “are held hostage by people, who are literally running [them] with violence and then [claiming] that black lives matter.”

Lemons said BLM was all about police brutality and the criminal justice system, and that gun violence was beyond its scope – even if it was directed against black people.

“If someone started a movement that said ‘cancer matters,’ and then someone came and said ‘why aren’t you talking about HIV’ – it’s not the same thing,” he said.

The interview divided commenters on Twitter. Some said Crews had embarrassed himself.

Somebody needs to go snatch Terry Crews. That interview with Don Lemon tonight was dog whistle misogynoir. PERIOD. And everyone should be naming it as such.

Others criticized Lemon for talking over his guest, saying he apparently didn’t want an uncomfortable truth about BLM to be aired on CNN.

After Crews argued that the BLM organization wasn’t taking a stand against black-on-black crime, Lemon claimed that denouncing that crime and police brutality was “apples and oranges,” and not in line with the mission of BLM (more on his point coming up). pic.twitter.com/7JvGCLyBlt 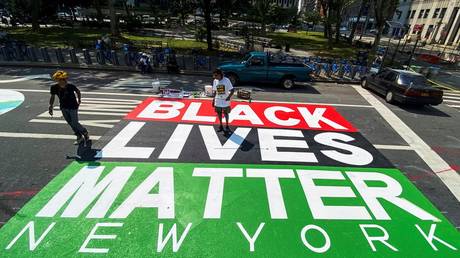