The court has also been asked to give custodial sentences to three other defendants – producer Alexey Malobrodsky (five years), theatre director Sofia Apfelbaum (four years), and studio general director Yuri Itin (four years). It has also been recommended that all four defendants pay a fine, with Serebrennikov liable for the highest penalty – 800,000 rubles ($11,500).

According to the prosecution, Serebrennikov and the other defendants embezzled 129 million rubles ($1.8 million) of cash allocated from Russia’s federal budget for the theater project ‘Platform’. The initiative was created by Seventh Studio, Serebrennikov’s non-profit organization. The director was initially detained in August 2017, and the investigation has been ongoing ever since. All of the defendants have pleaded not guilty.

Investigators and prosecutors say employees of the Seventh Studio funneled funds through fictitious agreements, overestimated costs, and misappropriated money. During the audit, most of the organization’s financial documentation was allegedly destroyed by its employees.

Nina Maslyaeva, the former chief accountant of Seventh Studio, has confessed to her part in the alleged scam and has been a primary witness for the prosecution.

According to some of his supporters, the case against Serebrennikov has been entirely fabricated, as a retaliation for his participation in anti-government protests. The director’s works have often been described as anti-establishment, his plays at Moscow’s Gogol Center famously being popular with the country’s liberal intelligentsia.

Serebrennikov has received wide-ranging support from throughout the Russian artistic community. On Sunday, the eve of Monday’s court date, a letter requesting that the lawsuit be ended was signed by 3,180 of the country’s most well-known talents, including directors, actors, and musicians. Amongst the signatories was Danila Kozlovsky, one of the country’s most famous actors and star of Canadian TV series ‘Vikings’. 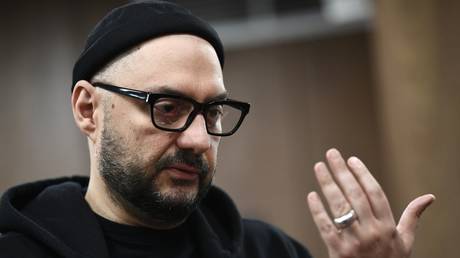