A Delta Air Lines flight en route from Palm Beach, Florida to New York’s LaGuardia Airport had to make an emergency landing at JFK after the pilots reported a mechanical problem that turned out to be a huge dent in the jet’s nose.

The Airbus A319 with 43 passengers on board changed course out of an “abundance of caution,” a Delta spokesperson later told journalists. The pilots reported problems with the navigation equipment, according to the Federal Aviation Administration (FAA), and the plane landed safely at John F Kennedy International Airport on Monday evening.

.@Delta flight 1076 from West Palm Beach to LGA diverted to JFK after a bird strike damaged the nose cone. 43 passengers were aboard. The flight landed safely and without incident. pic.twitter.com/WlNXn6atOY

Photos circulating on social media show that the aircraft’s front end had partially caved in. The nose cone protects an airliner’s radar equipment, which may explain the pilots’ discovery of a loss of performance.

It is not known what exactly caused the huge dent, but the airline initially said it could be the result of a bird strike. Later, it added that hail could also have inflicted the damage. The FAA is investigating the incident. 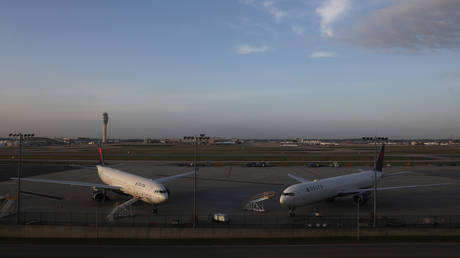 Share:
2020-07-08
Previous: If China seeks world domination, should the US keep doing business with it? FBI chief Wray seems to want it both ways
Next: Who’s the ‘con artist’ now? Robert De Niro’s restaurant chain taking up to $28 MILLION from Trump admin Covid-19 relief loans