The leader of Russia’s second most popular political party, has attacked Vladimir Putin for failing to “get rid of the oligarchy,” and losing the confidence of the nation, as the country prepares to vote on a new constitution.

“I want the national leader to show his will in times of need,” he explained. “Recent initiatives, starting with pension reform, undermine the country’s stability and confidence in the supreme (political) power. Putin’s political strategists, specialists, and information services are not working well. All the latest steps are not just disappointing but depressing.”

On July 1, Russians will vote on a wide-ranging selection of amendments to Russia’s most fundamental document. Zyuganov said the Communists have always wanted to change the ‘Yeltsin Constitution’, but they believe Putin hasn’t gone about the process correctly. In the early 1990s, with western support and primarily to keep the Communists at bay, former President Boris Yeltsin introduced a ‘hyper-presidential system, which consolidated power in the Kremlin.

“The 1993 constitution was a plastic bag pulled over the head of the country; it has strangled us for around 25 years,” he said. “When Putin took the initiative, went forward, dismissed the government, and announced constitutional reform, we took an active part in this process and prepared 108 amendments.”

In Zyuganov’s opinion, the president and the ruling party, United Russia, have ignored the suggestions of the Communists, choosing just to listen to themselves. The leader believes that their proposals would have fundamentally improved the lives of ordinary people.

“I stand for a strong and holistic state and a decent pension. Our party has made 15 amendments that would radically change the country’s socio-economic policy in favor of all citizens,” he said. “I was sure that United Russia would accept something from our proposals, but they dismissed everything.”

Zyuganov also thinks that the new Constitution has been rushed through without any actual discussion, and without a real referendum. According to the veteran politician, Russia discussed renaming the country’s airports for a whole six months, but a new constitution for only two.

“The new Constitution can be adopted only by referendum, and not by some kind of vote, which opens the way to anarchy, unrest, and Ukrainization,” he said. By Ukrainization, he means something similar to the effects of the 2014 ‘Maidan’ in Kiev.

When people go to the polls on July 1, Zyuganov hopes they will vote against the new Constitution – rather than boycott the process. Instead he hopes the changes are defeated, opening up the possibility of different proposals in the future.

“I will seek the adoption of our amendments and the support of our people in the elections. The more people who vote for us, the sooner we get out of this sh*t.” 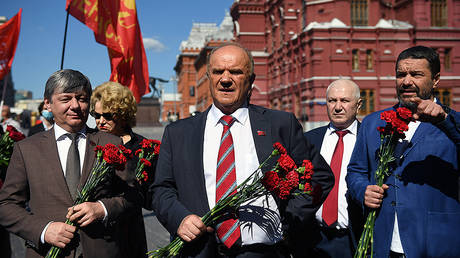