Breaking News
Home » World » ‘Don’t do it!’ Trump pushes back against NYC plans to take down Teddy Roosevelt statue

‘Don’t do it!’ Trump pushes back against NYC plans to take down Teddy Roosevelt statue

President Donald Trump has thrown his weight behind the chorus of voices opposing the removal of a Theodore Roosevelt statue in New York, passionately calling for the plans to be dropped.

“Ridiculous, don’t do it!” Trump tweeted on Monday. His post included a Washington Times article which quoted NYC Mayor Bill de Blasio as saying it is the “right decision and the right time to remove this problematic statue.”

Ridiculous, don’t do it! https://t.co/VYez8p9AJh

The statue, placed at the front steps of the American Museum of Natural History (AMNH), is due to be removed by request of the museum itself and amid growing outrage over statues that Black Lives Matter protesters see as glorifying the legacy of racism.

Unveiled in 1940, the bronze statue features the 26th American president sitting on a horse and flanked by a Native American and an African American. As AMNH puts it, the monument “communicates a racial hierarchy that the museum and members of the public have long found disturbing.” 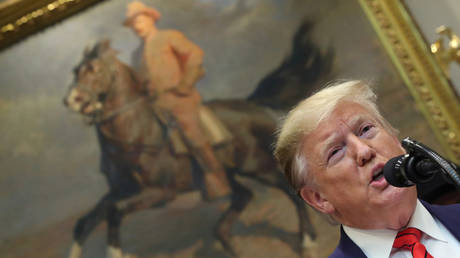