Former journalist Ivan Safronov, arrested on Monday, has been accused of transmitting classified information to Czech intelligence, at the behest of the US. His lawyer says he is being persecuted for his previous journalism work.

At the time of his arrest, Safronov was working as an adviser to Dmitry Rogozin, the head of the Russian Space Agency Roscosmos. He had previously written for well-known newspapers Kommersant and Vedomosti.

According to Safronov’s lawyer, Ivan Pavlov, investigators believe he was recruited by the Czechs in 2012, and sent them classified information in 2017 via the internet. The information regards Russian arms supplies to the Middle East and Africa. Safronov is suspected of high treason, and he could face up to 20 years in prison.

The Czech Republic’s First Deputy Prime Minister and Minister of the Interior Jan Hamacek has refused to comment.

“Investigators believe that the United States has become the ultimate recipient of the classified information from Safronov,” the lawyer said.

Pavlov explained that the case file is made up of seven volumes, which “rarely happens, even after years of preliminary investigation.” In his opinion, this suggests that Safronov had been watched for a very long time.

“There is no evidence of the validity of the suspicions,” he added.

Safronov’s supporters claim that his case has been fabricated in response to his journalistic activities surrounding Russia’s military-industrial complex. Following his arrest, several people were arrested in the center of Moscow protesting his arraignment. Amongst the detainees was well-known journalist, socialite, and former presidential candidate Kseniya Sobchak, wearing a ‘Free Ivan Safronov’ T-shirt.

When asked if he knew about the public reaction to the arrest, President Vladimir Putin’s spokesman Dmitry Peskov urged people not to “confuse public outcry with media outcry.”

Peskov claimed that publications supporting Safronov are doing so based on emotions, and not on the information of the Russian security service, the FSB.

“They do not and can not have any real information on the results of counterintelligence work,” he said.

Despite the protests, other sources suggest that the case is not baseless. Speaking to Russian newspaper Moskovsky Komsomolets, a “source familiar with the materials of the case” explained that the accusations have been confirmed by the “findings of the investigation.”

In a closed session, Moscow’s Lefortovo District Court decided to detain the former journalist for two months until September 6. Safronov denies any guilt. 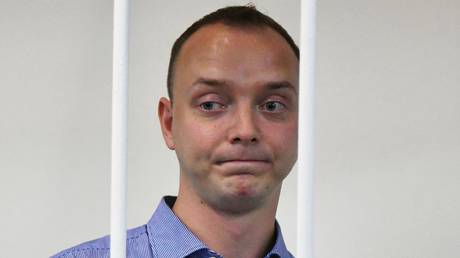