Eric Joyce, a former shadow minister for the UK Labour Party, has pleaded guilty to a making an indecent image of children. The disgraced politician was ordered to sign the Sex Offenders Register and now faces prison time.

The former MP appeared in court on Tuesday and admitted making an indecent photograph in the form of a 51-second video. The clip “depicts a number of children,” Judge Emma Peters revealed.

“Some are quite young, one is said to be 12 months old – clearly a Category A movie,” she said.

Category A is the most severe class of indecent imagery, and can include penetrative sex, sadism, and sex with animals. Producing such material is punishable with imprisonment. The court stressed that it “takes such incidents very seriously” since they “fuel the abuse of children.”

According to the judge, the video was made at some point between 2013 and 2018, and Joyce claims that “he accessed it via an email which he says was a spam email.”

“At the time he was drinking heavily and he has now undergone work with the Lucy Faithfull Foundation and a psychotherapist,” the judge added.

The case against Joyce has been running since late 2018, when he was charged under the Protection of Children Act. It’s the latest scandal in the turbulent career of the former army major turned politician.

Joyce served as MP for Falkirk in Scotland from 2000 to 2015. For the first 12 years, he was with Labour, before switching to being an independent for his final three. During his time in parliament, Joyce was involved in several incidents, including a pub brawl with four fellow politicians in Westminster. He was also convicted of drunk driving and abusing airport workers on several occasions. 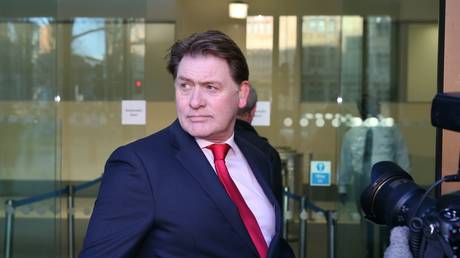 Share:
2020-07-08
Previous: How to weigh the risk of going out in the coronavirus pandemic, in one chart
Next: Former UK Chancellor Hammond slams ‘alarming’ rise in ‘anti-Chinese sentiment’ within Tory Party amid Huawei row