An impromptu party in Charlotte, North Carolina descended into chaos after a shooting killed two people. Several others were wounded by gunfire and injured by vehicles that plowed through the fleeing crowd.

Hundreds of people reportedly flooded onto the streets on Sunday night as part of the ongoing Juneteenth celebrations – the holiday that marks when the last African slaves in the South learned they had been freed. However, the festivities came to a screeching halt after emergency services responded to a call about a pedestrian in the area being hit by a car. Gunfire broke out moments after first responders arrived, killing two and wounding seven others as partygoers scattered in all directions.

Charlotte NC tonight. Morning of Monday June 22nd. Ambulance pulls up to render aid to a person struck by a car, gunfire erupts from several locations including fully automatic submachine gun fire. It’s turning into a war zone. EMTs will not be responding if this keeps happening. pic.twitter.com/Ox7mZlPAR2

Footage on social media reportedly shows the moment the shooting began. In the clip, an ambulance is seen driving down the road towards the block party. Seconds later, multiple gunshots can be heard as people run for cover.

Five people were struck by vehicles as they fled the area, according to police. There was evidence that multiple shooters were involved in the incident, law enforcement said, but no arrests have yet been made. Local media reported that police are currently searching for several suspects.

Photographs purportedly taken at the scene show a taped-off intersection as police secure the area. Residents can be seen watching nearby, as the remnants of their party – including balloons – lie in the street. 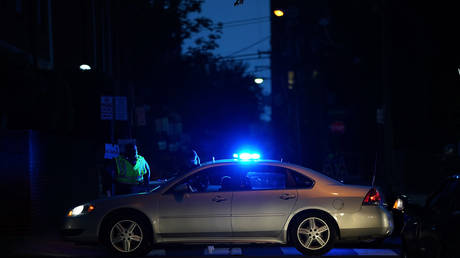