‘He’s definitely not right in the head’: Residents describe Reading terrorist’s past violence to RT’s Ruptly

Saadallah was arrested after carrying out a knife attack in a park in Reading on Saturday evening, in which three people were killed and a further three were seriously injured. The Libyan man, who had only recently been released from prison, then hid out in an apartment block before police converged on the scene.

“Around eight o’clock last night, armed police turned up with their guns, police dogs, saw grinders, and they were patrolling the area for a good hour and a half, two hours. Then MI5 came about two hours later and they all rushed into there… one big bang… And then they all came out, and they all left the scene,” local Sophie Parker said of the man’s arrest while speaking to Ruptly.

“All the kids were outside till two, 3am in the morning. It’s absolutely diabolical, diabolical, it shouldn’t happen, it really shouldn’t happen,” local Kieran Vernon said, detailing how many were oblivious to the fact that a suspected terrorist was hiding in the area where their children were playing outside.

Later, one frequent visitor to the Basingstoke Road estate where Saadallah was arrested described him as possibly mentally unstable.

“Yeah, he’s kicked off before here, a while ago; he smashed and threw his telly off the balcony, that was like a year ago,” a man named only as Adam, the boyfriend of one of Saadallah’s neighbors, told Ruptly.

When asked whether he believed Saadallah had mental health problems, Adam said that it could well be true.

“I think so. I do believe that, yeah. I do believe he might have that. He used to have a key worker or something, he’s definitely not right in the head.”

25-year-old Saadallah was arrested at the scene as counter-terrorism police assumed control of the investigation on Sunday. 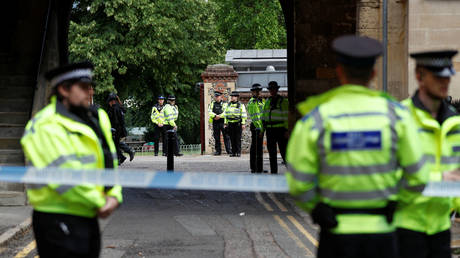