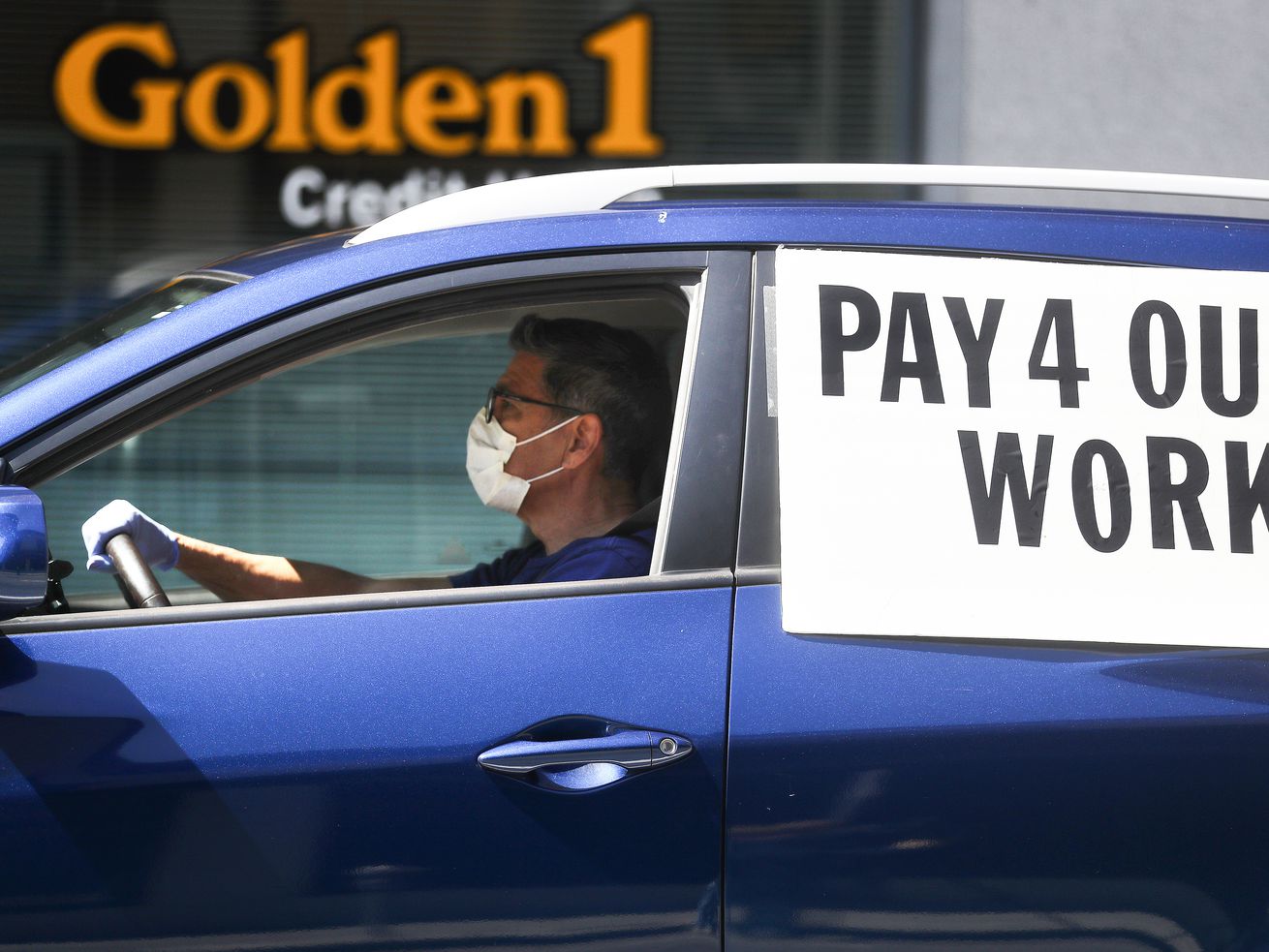 A driver wears a face mask and gloves as Uber and Lyft drivers with Rideshare Drivers United and the Transport Workers Union of America conduct a ‘caravan protest’ outside the California Labor Commissioner’s office amidst the coronavirus pandemic on April 16, 2020 in Los Angeles, California | Mario Tama/Getty Images

Why it’s taken so long for some states to set up unemployment programs for freelancers, gig economy workers, and self-employed people.

Millions of workers who are self-employed, freelancers, or independent contractors qualify for a new unemployment program, set up under the recently passed CARES Act. But many are still waiting to apply for those benefits.

The Pandemic Unemployment Assistance (PUA) expanded who is eligible for unemployment insurance benefits. Freelancers and independent contractors, previously excluded from these programs, now qualify through the end of July — and possibly beyond if Congress extends the program.

But it has been a challenge for states to get this money out the door. Unlike simply throwing more money at their existing unemployment insurance programs, many states have had to build new programs from scratch to help freelancers and independent contractors. Some of those programs are already accepting applications and preparing to send out checks while others are still being built.

Washington, Massachusetts, Georgia, and Alabama are among the states already accepting PUA applications, but many other states haven’t yet announced the dates for when they’ll have their program set up and ready for workers to file. Ohio, for instance, announced its program won’t be ready until mid-May, and many more states are telling workers to keep checking back for more information.

The best way to find out how to apply for your state’s PUA program — what the status of it is — is to visit your state’s unemployment website.

The application process for PUA programs is more complicated than for those who have been laid off or furloughed from an employer and who are eligible for regular unemployment insurance.

“Whatever documentation they have about how they get their money would be helpful,” said Michele Evermore, a senior policy analyst at the National Employment Law Project. If people are lacking documentation, they can file good-faith attestations about their wages to unemployment offices, but documents are preferred.

Why has it been taking so long for states to distribute Pandemic Unemployment Assistance funds?

Each state is running on its own timeline rather than a set one by the federal government. Washington state set up its PUA program by April 18, but the numbers of people logging on to apply for benefits was so great the website crashed and phone lines jammed, according to the Seattle Times. Massachusetts recently announced it would start accepting applications on April 20 — about 10 days ahead of schedule. Officials in Pennsylvania said freelancers and gig workers could start applying by the end of the month. Other states, including Alabama and Georgia, say freelance workers can start applying through their unemployment websites.

Other states, including Ohio, are already looking at a May timeline before they can get their PUA programs ready to accept applications, and others haven’t released timelines. New York and Michigan, for instance, are asking people to submit PUA claims but are holding on to them until their programs are up and running.

Finally, states have to program the computers in their unemployment systems with the new information — and some states rely on mainframes and programming that haven’t been updated since the 1970s.

It’s a complicated process, made even more complicated given the sheer number of people trying to get benefits at the same time. States first have to wait for the Trump administration to issue guidance so they know they’re administering a benefit correctly. Then they have to set up their own policies and interpret them to decide who qualifies, said Evermore.

“These benefits are layered on top of a system that works well in some states and works terribly in others,” said Evermore. “When a recession rolls around, how are people surprised that it’s hard to get benefits?”

Are the benefits going to run out?

With 22 million people applying for unemployment benefits over the last month, there’s already consensus in Congress that another relief bill is needed, with more money for unemployment programs.

Some ideas congressional Democrats are discussing include either extending the extra $600 a week in federal aid or adding more weeks before an individual would be kicked off regular UI benefits (without the extra $600 per week), a senior Democratic aide recently told Vox.

“We want to make sure that we have covered unemployment insurance with sufficient resources,” House Majority Leader Steny Hoyer told Vox on Tuesday. “At this point in time, I don’t have a number, but we want to make sure those who are unemployed have the ability to support themselves and their families.”

If you live in a state that’s slow to set up its PUA program, it’s important to know that doesn’t necessarily mean you will lose out on your full amount of benefits. Retroactive pay was written into the law, so people who have to wait longer to file will likely get a bigger check up front, according to Andy Stettner, a senior fellow at the Century Foundation.

“You could be looking at a $5,000 check all at once,” Stettner told Vox. But with rent and bills looming when May 1 rolls around next week, many people are wondering whether they can wait that long for their states to get things together.

Share:
2020-06-24
Siow Wan Liang
Previous: Georgia’s unusual unemployment benefits rule lets some workers fall through the cracks
Next: Getting unemployment has been a nightmare for millions of people across the country

How to get the coronavirus unemployment benefits, explained