Breaking News
Home » World » If China seeks world domination, should the US keep doing business with it? FBI chief Wray seems to want it both ways

If China seeks world domination, should the US keep doing business with it? FBI chief Wray seems to want it both ways

If the picture of Chinese ‘malign influence’ in the US is as dire as FBI Director Chris Wray painted it, the two nations ought to be at war. Yet Wray doesn’t advise that, suggesting it’s all just Russiagate-like fear-mongering.

“China is engaged in a whole-of-state effort to become the world’s only superpower by any means necessary,” Wray argued on Tuesday, speaking at an event hosted by the Hudson Institute in Washington, DC.

In addition to being able to execute its malign influence projects with “authoritarian efficiency,” China is “calculating, they’re persistent, they’re patient and they’re not subject to the righteous constraints of an open, democratic society or the rule of law,” Wray argued.

#FBI Director Christopher Wray will discuss the counterintelligence and economic espionage threat posed by the Chinese government today. You can watch his speech live at 10:30 a.m. EST at https://t.co/OEBaKqvmZx.

Dire words, to be sure, especially when followed by a vivid description of alleged economic espionage, seeking to steal US technology and trade secrets. There has been a 1,300 percent increase in economic espionage cases involving China over the past decade, Wray said, listing half a dozen examples of scholars or scientists who had allegedly sold secrets to Beijing as part of a ‘Thousand Talents’ government program.

The US needs to respond with an “all tools, all sectors” approach, going above and beyond the FBI, Wray argued, saying that China will “continue to try to misappropriate our ideas, influence our policymakers, manipulate our public opinion and steal our data.”

Chris Wray says FBI counterintelligence investigations related to China have increased *1300%* in the past decade.

A new China-related probe is opened every 10 hours https://t.co/vGWJHTb4l1

Note that this grim picture far exceeds anything the US media and intelligence operatives have accused Russia of over the past four years, resulting in a massive deterioration of US-Russian relations to Cold War levels.

This dovetails with the hostility toward Beijing routinely displayed by US Secretary of State Mike Pompeo, who recently compared China to the Nazis and even argued that NATO should redefine its mission into a crusade against the Chinese Communist Party. Pompeo has also pushed Europe to sever trade ties with China.

Wray, however, struck a different note. In his telling, the US can and should confront Beijing while continuing to do business with the Chinese, host Chinese tourists and students, and “coexist with China on the world stage.”

Even though the alleged or convicted spies he named were Chinese-Americans or green card holders, he maintained that the conflict is not about them, but with the government in Beijing, and that US society has been enriched by Chinese immigrants as well as some 100,000 students and researchers who come over every year.

Not only is there a vast gap between Pompeo and Wray’s positions, the FBI director himself appears caught in a contradiction. If, as he says, the Chinese government permeates their entire society and economy, and runs this alleged campaign against America, then it logically follows that ordinary Chinese can’t be trusted and that US companies should not do business in China, or Chinese companies be allowed to do so in the US.

That latter part is already kind of happening, with bans on companies like Huawei. Yet Wray refuses to take his argument to its logical conclusion, perhaps because that might open him up to accusations of racism.

Wray is in a precarious position. He was appointed to clean the house when only a tiny bit of malfeasance by James Comey’s FBI was known to the American public. Since then, a mountain of evidence has emerged that the Bureau and its senior management played a major role in the Russiagate conspiracy. Now Wray is asking Americans to believe that China is a major and valued trading partner but also a clear and present danger to the US, and they should take the FBI’s word for it.

One could certainly understand if some stay skeptical. 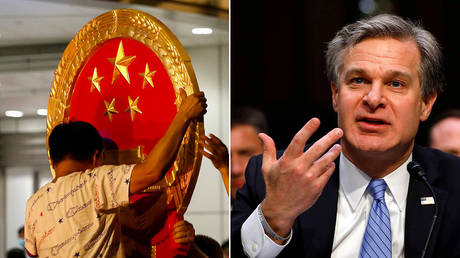