“Some of the politicians in the UK still have this very strong colonial mindset. They fail to recognize that Hong Kong is no longer under the British colonial rule,” Liu Xiaoming told a virtual press conference on Monday.

The Chinese diplomat spoke to the media to defend the national security law, which gives the central government more sway in the semi-autonomous city, which was returned to China by Britain in 1997.

He said the rhetoric coming from the British government, including PM Boris Johnson’s plan to grant permanent residency to holders of British National (Overseas) passports, amounted to “gross interference in China’s internal affairs” and warned that there may be consequences for it. Liu declined to describe how Beijing would react, however, to the British offer.

#China‘s ambassador to the #UK accuses the government of “gross interference” for its latest plans to offer citizenship for up to 3 million overseas nationals in Hong Kong. pic.twitter.com/wxKb0LbmhW

“We regard the UK as a partner. We never [say] that the UK is a ‘potentially hostile’ country. You never heard this word from any Chinese leader, from any official,” he said, adding that China seeks friendly prosperous relations with the UK.

The national security law gives Beijing more powers to deal with crimes of secession, subversion, terrorism, and collusion with foreign powers aimed against China in Hong Kong. It was passed after months of mass protests and rioting in the city, which were supported by Western powers.

Britain says the law violates the “one country, two systems” arrangement, which was established when Hong Kong was transferred back under Chinese rule. Beijing has brushed off international criticisms and says the legislation is necessary to protect public order in Hong Kong. 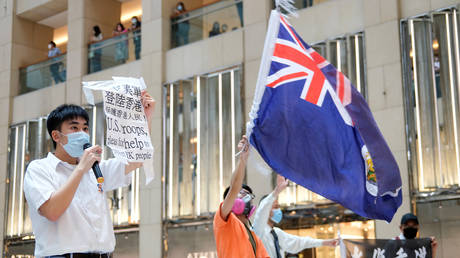 Share:
2020-07-08
Previous: ‘Sanction yourself then?’ Top UK diplomat derided after warning ‘global Britain’ will sanction human rights violators
Next: Ex-colleagues take to the streets in protest as former journalist Safronov is accused of spying for Czechs & Americans