Pussy Riot co-founder Pyotr Verzilov jailed for 15 days on ‘hooliganism’ charges, activist says he was set up by police

Pyotr Verzilov, a controversial Russian shock artist and co-founder of ‘punk’ art collectives Pussy Riot and Voina – along with ex-wife Nadezhda Tolokonnikova – has been jailed for 15 days for “swearing in public.”

The penalty comes the day after Verzilov said police questioned him about last year’s Moscow protests, specifically over allegedly using violence against a law enforcement officer.

On Sunday evening, the activist was released, but after a street altercation he was again detained, taken to a police station, and kept overnight. Cops accused him of “repeatedly expressing obscene language.”

On Monday, a Moscow court found him guilty of using foul language in public. Verzilov contended that he was physically targeted twice by a ‘provocateur’, but he did not use offensive words in his speech.

The incident happened near the entrance to the Krasnoselskaya metro station in the Russian capital.

Verzilov told the judge that after the interrogation, he noticed he was being watched by police. Soon after, a man knocked him over.

“Realizing that I was in a classic example of police provocation – when you are deliberately provoked, I abruptly stood up and Margarita (his girlfriend) and I started to run away from him, but he caught up with us at the shopping center and knocked me over a second time, screaming some words,” the accused said, according to his own news site MediaZona.

“But he caught up with us at the shopping center and knocked me over a second time, screaming some words, After 20 seconds, police officers appeared.”

Verzilov’s arrest sparked a flurry of speculation on social media on Sunday, and in some Russian news outlets, where reporting accuracy was rather tenuous.

There were initial suggestions that he had been detained by the police anti-extremism division. MediaZona and several other pro-opposition outlets initially described the incident as a “kidnapping” of the activist.

Britain’s state broadcaster the BBC raised plenty of eyebrows when it announced that Verzilov had planned to stand in front of a tank during a rehearsal for this week’s rescheduled Victory Day parade in Moscow. The outlet – which has received tens of millions of pounds from the London government to bulk up its coverage of Russia – told its readers that Verzilov was hoping to emulate the iconic Tiananmen Square ‘tank man’ photo from 1989.

The man himself has denied the BBC’s allegation, saying that he didn’t plan any public action of that nature. 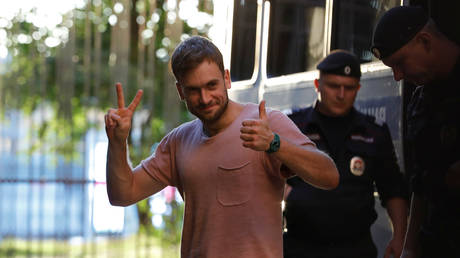