Vladimir Putin has marked the 79th anniversary of Operation Barbarossa – Nazi Germany’s invasion of the Soviet Union – with a visit to the new Orthodox cathedral built for Russia’s armed forces in Kubinka, outside Moscow.

Monday morning’s event emphasized the close connection between church and state in contemporary Russia. June 22 is an important memorial day, as the USSR sustained around five million military casualties in the five months that followed the surprise German attack. In total, an estimated 27 million Soviet citizens died in the conflict, the majority Russian. Putin said that the memory of World War Two (also known as the ‘Great Patriotic War’) for the people of Russia is “absolutely sacred.”

The president was accompanied by his defense minister, Sergey Shoigu, and Patriarch Kirill of Moscow. He took a tour of the cathedral, which was consecrated on June 14, and participated in a prayer service. The Cathedral of the Resurrection of Christ and the ‘Road of Remembrance’ museum complex are located at the ‘Patriot Park’ facility, around 55km to the west of central Moscow.

“For us, the citizens of Russia, the memory of the Great Patriotic War, of all those who fought and died, who brought victory closer, by all means, is absolutely sacred,” Putin said. “It is always with us. It gives us the strength to serve our country.”

He asserted that the modern generation of soldiers and officers remains faithful to the traditions of the past, and they perform their duties professionally. “We know that the state’s defense and security are reliably ensured,” the president added.

Services in the place of worship have already begun, but visitor numbers are limited due to the Covid-19 pandemic. 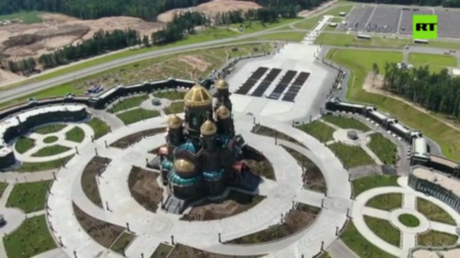