The California Faculty Association has published a list of demands aimed at “redress for systemic anti-Black racism in the CSU,” insisting that black faculty, students and staff are “criminalized both on CSU campuses and in our communities.” Its orders begin with a directive that “everyone needs to recognize: black lives are precious” and “take serious, tangible and public steps to protect Black lives, Black futures, and Black joy,” and spiral off into calls for revisiting racial segregation.

In addition to abolishing tuition for “Black, Native and Indigenous students,” the union has demanded the university system join its efforts to overturn a statewide ban on affirmative action, a controversial program that gives preference to minority students in admissions (or minority faculty in hiring). The professors have also demanded the university prioritize and expand its Ethnic Studies curriculum, forcing each student to take at least one Ethnic Studies course lest they participate in the “‘spirit murdering’ and violent deaths of Black communities.”

While opponents of affirmative action often denounce it as “reverse racism,” the CFA arguably went even further in channeling the segregation era, calling for “the establishment of Black Student/Resource Centers on every CSU campus” and for black faculty members to have their performance, promotion, and tenure reviewed by fellow black faculty – their “racial peers.” Moreover, “targeted hiring programs” are needed to “promote and develop the scholarship and creative activity of Black faculty,” the union claims, lest they be “culturally taxed” by having to service the needs of all the black students themselves. Black counselors must be hired to provide mental health services for black students, because white counselors can’t possibly understand the black experience.

To this end, the university should “not rely on police for safety,” instead adopting alternatives like “Safe Outside the System” (SOS), an “anti-violence program led by and for Lesbian, Gay, Bisexual, Two Spirit, Trans and Gender Non Conforming people of color.”

The eight-page screed ends with the somewhat chilling line: “CFA is firmly committed to our program of anti-racism and social justice; there is no going back.”

The civil rights activists who fought to end segregation decades ago might raise an eyebrow at that, observing that “going back” is exactly what the CFA is suggesting its employers do – but the union has made it clear that such pushback will not be accepted. “If you choose to write CFA about these demands, we expect such messages to show your support, intentions, and plans for action to end systemic racism and anti-Black racism in the CSU, California and the United States,” the signatories – including CFA’s board of directors and several race-based caucuses – warn. Their muscular form of ‘tolerance’ apparently does not extend to dissent. 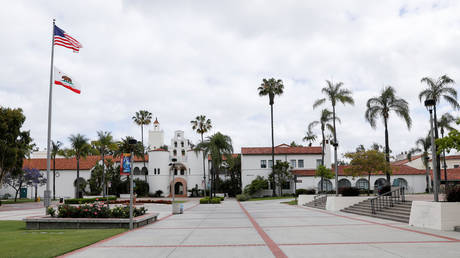