Gunfire has reportedly erupted for the second night running in the controversial ‘autonomous zone’ created by Seattle protesters, leaving at least one person hospitalized. Police are investigating reports of multiple shootings.

One person was transported to the city’s Harborview Medical Center following an alleged shooting inside the Capitol Hill Autonomous Zone (CHAZ) on Sunday night, Seattle Police said, adding that the force was looking into unconfirmed reports of a separate incident involving gunfire in the area. Local media, citing a hospital spokesman, claimed the victim was in “serious condition.”

CCTV footage posted to social media purportedly shows the moment when violence broke out. More than a dozen loud bangs – believed to be gunshots – can be heard as people in the street run for cover.

Video shows people running after gunshots are heard in the Seattle #CHOP a little over half an hour ago. #Seattle #Shooting pic.twitter.com/2qDaAk8pGM

A streamer named Shawn Whiting also caught the incident on camera. A clip taken from his Twitch stream shows him walking down the street before a series of shots sent him scrambling for safety. After retreating behind a concrete barricade, Whiting explained to his viewers that there were “a lot of gunshots” and calls for medics. An unidentified man then approached him from behind and asked him if he was armed. Whiting replied that he didn’t have any weapons, at which point he was instructed to stay where he was and told it wasn’t safe to try to flee the area.

According to one eyewitness, the gunfire was a result of a drive-by shooting that targeted protesters marching through the city.

After the incident, Whiting’s phone was reportedly stolen by members of CHAZ’s security detail. One of the men can be heard yelling “delete that s**t” before grabbing the phone. In a follow-up stream, Whiting said that his phone was returned to him and that he suffered minor injuries but was safe.

The man who recorded this incident had his phone stolen minutes later. #chaz #chop pic.twitter.com/p2OrCFOnjK

The violence marks the second night of disturbances in CHAZ (also referred to as the Capitol Hill Occupied Protest, or CHOP). One person was killed in the early hours of Saturday, and another seriously wounded. Protesters were criticized for blocking police from reaching the victims, while demonstrators accused authorities of refusing to help. 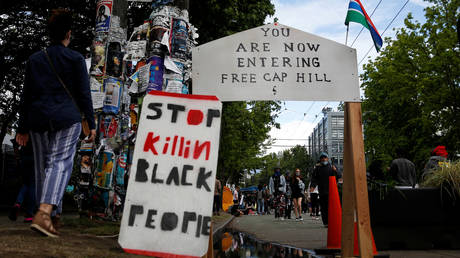