The UK’s security minister has insisted 25 terrorist plots have been foiled in the last three years, though he refused to confirm whether the Libyan Reading attack suspect – who acted alone – was known to intelligence services.

In an interview with Sky News on Monday, James Brokenshire wouldn’t be drawn on media reports that Khairi Saadallah – the 25-year-old Libyan named as the main suspect in the brutal knife attack that left three people dead and another three injured in Reading, England on Saturday evening – was known to MI5, the UK’s domestic spy agency.

The Tory minister did reveal, however, that “since 2017, 25 terror plots have been foiled,” and he accepted that the government may have to change policy in light of the latest attack.

Security Minister @JBrokenshire says 25 terror plots have been foiled in the UK since the Westminster attack in 2017.

He added that “all of the facts and circumstances” of the Reading terror attack are being looked at.

It comes as Home Secretary Priti Patel said the “tragic event,” which took place in a park in the southern British town at the weekend, “was the actions of one lone individual.”

Saadallah was detained by Thames Valley Police a short distance from the scene of the stabbing spree at Forbury Gardens and initially arrested on suspicion of murder. However, he was re-arrested on Sunday under the Terrorism Act 2000 by detectives from Counter Terrorism Policing South East (CTPSE).

According to various UK media reports, security forces are checking whether Saadallah has any mental health issues. They also cite the man’s neighbors, who have said they believe he had been recently released from prison. It has also been reported that Saadallah is an asylum seeker.

36-year-old schoolteacher James Furlong and his friend, American man Joe Ritchie-Bennett – a 39-year-old UK resident – have been named as two of the victims. Two other people wounded in the attack remain in hospital, while one has now been discharged. 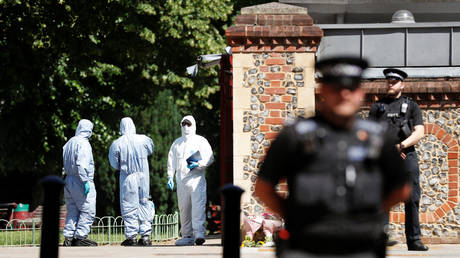