A man was captured on video throwing a live firework at what appears to be a sleeping homeless person in Harlem, with a massive explosion seen going off at point-blank range.

A brief clip made the rounds on social media on Monday night, showing a group of men and women recording the assailant as he pitched a lit firework at somebody laying on the sidewalk, presumably a homeless man, outside a business in Harlem. The firework is seen detonating just inches away from the victim’s body, making a loud bang and shooting off flares as one bystander is heard laughing.

SHOCK VIDEO: Thugs are seen throwing fireworks at what appears to be a sleeping homeless man on Malcolm X Blvd in #Harlem. #DeBlasiosNYC @NYCMayor @NYPDNews

While it’s unclear when the incident took place, police sources told the New York Post it occurred on Harlem’s Lenox Avenue near West 113th Street. Whether the victim suffered any injuries, or their extent, also remains unknown.

The cruel and dangerous stunt comes as New York and several other US cities are gripped by a wave of fireworks complaints, with some police and fire departments seeing a massive spike in calls compared to previous years. Boston police, for example, recorded 1,445 fireworks complaints in the first week of June alone, as opposed to 22 during the same week last year. Footage out of New York City in recent nights, meanwhile, shows what one bystander dubbed a “warzone” of fireworks and gunshots.

you won’t believe what happened in brooklyn last night bruh
motherfuckers were having a fireworks war near my neighborhood dawg
i can’t make this shit up pic.twitter.com/yyuvnTpYGt 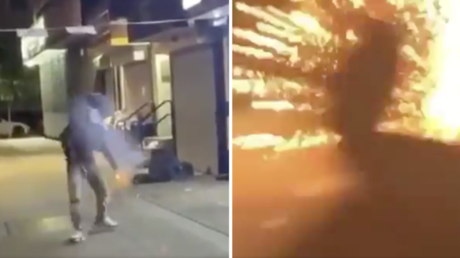