Law enforcement in Los Angeles County has launched a probe in response to a complaint filed by an off-duty officer, who claims that a beverage he purchased at Starbucks contained a tampon, local media reported.

The unidentified LAPD officer purportedly found the tampon in his Frappuccino after patronizing a Starbucks cafe in Diamond Bar, according to a local FOX affiliate. The off-duty cop used his police credit union debit card to purchase the drink, which may have alerted employees that he was law enforcement.

A stomach-churning photograph shared on social media purportedly shows the coffee-drenched tampon in question – which had been hoisted out of the beverage using a straw.

The officer reportedly stormed back into the cafe to complain after making the grisly discovery. The LAPD police union told local media that the alleged incident was a “disgusting assault” on a police officer and that those responsible should be “publicly exposed, fired, arrested, and prosecuted for their cowardly and repugnant actions.”

The Los Angeles County sheriff’s department received a report of the incident and launched an investigation, FOX 11 said. Detectives are currently reviewing surveillance video taken from the scene.

The case comes a week after three NYPD officers were allegedly poisoned after claiming their Shake Shack milkshakes had been tainted by bleach. A subsequent investigation found no criminality on the part of Shake Shack employees. Authorities have suggested that the incident was caused by the restaurant’s milkshake machine not being properly cleaned.

Police aren’t the only ones who have reported suspected instances of food tampering. Earlier in June, National Guard troops deployed to the US capital found broken glass in their pizza delivery. 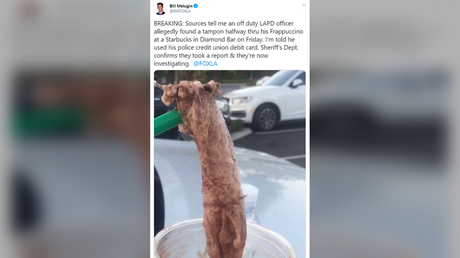