It began with Confederate generals and quickly escalated to Columbus and former US presidents; now the monument-removal crusade has come for Jesus, with racial activist Shaun King insisting the depictions are ‘racist propaganda.’

“Yes, I think the statues of the white European they claim is Jesus should also come down,” King tweeted on Monday. “They are a form of white supremacy. Always have been.”

He also argued that all “murals and stained glass windows of white Jesus, and his European mother, and their white friends should also come down,” calling them “a gross form [of] white supremacy… tools of oppression [and] Racist propaganda.”

Sorry, there’s this thing called freedom of religion in US. Easier solution to your neuroses Shaun: just start your own new church and make your own artistic representations.

This could actually be a viable career option for you.

King is no fringe figure, either – the well-known racial justice activist rose to prominence through the Black Lives Matter movement and most recently served as a surrogate for Bernie Sanders, the Vermont senator who sought the Democrat presidential nomination.

His tweets came just a day after conservative pundits predicted the statue-smashing spree would come after Jesus.

Statues of Jesus are next. It won’t end. Pray for the USA

For several weeks now, protesters across the US have targeted “racist” statues – starting with generals who fought for the Confederacy during the American Civil War, but quickly moving onto Christopher Columbus, President Ulysses S. Grant, and others, including Thomas Jefferson and George Washington, two of the Founding Fathers of the US.

Not even the monument to the 54th Massachusetts Volunteer Infantry – an African-American regiment that fought in the Civil War – was spared vandalism. Meanwhile, the Natural History Museum in New York has decided to remove the statue of 26th US President Theodore Roosevelt, saying that its depictions of Native Americans and Africans made it a “hurtful symbol of systemic racism.”

The KKK would burn down churches in acts of domestic terrorism.

Shaun King is carrying on the tradition of Democrat violence against churches, as he is incites federal hate crimes on Twitter.https://t.co/Xs224ig8OG pic.twitter.com/tOnDgLEWoI

Some laughed it off with memes daring the “woke” activists to actually try.

This would not be King’s first controversy. In 2019, he falsely claimed the killing of a 7-year-old black girl in Houston was a racially motivated hate crime. In 2018, he falsely accused a Texas state trooper of rape. He has also been accused by other Black Lives Matter activists of embezzling or misusing donations sent his way. 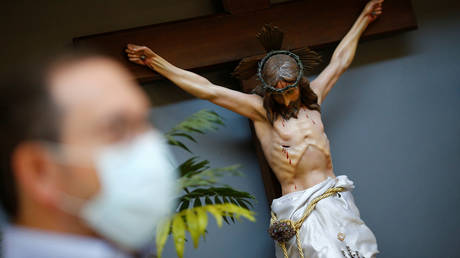