Shootings in New York City increased by a massive 358 percent over the last seven days, compared with the same time last year. The skyrocketing numbers have prompted the police commissioner to warn the worst is yet to come.

There were 12 shootings during the seven-day period in question last year, while 2020 has seen 55. More than 70 people were wounded in the 55 shootings, with at least 19 injured on Saturday when the city saw over a dozen incidents, most of which occurred in the Bronx. In one of these incidents, a man died after being shot in the neck while washing his car.

“It takes a long time to turn a ship that sees an iceberg directly in front of us,” said New York City Police Commissioner Dermot Shea, adding that the numbers had been trending upward “for a while” and that he had warned of a “storm on the horizon” in December.

Shea also said NYC had seen 100 shootings in May, the first time the city had hit that number in around five years.

The latest figures come only a week after Shea ordered the disbanding of an anti-crime unit which saw plainclothes police officers stopping individuals and searching for weapons. The effort at reform was sparked by nationwide protests following the killing of George Floyd by a Minneapolis police officer last month.

Shea said that the tactic of “stop, question and frisk” deployed by the unit was too dated and was harmful to communities of color in that it eroded trust between police and the citizens. “I am proud of what they did, but we made mistakes,” he concluded.

He promised additional funding for community anti-crime initiatives like a crisis management system, which would add staff to police precincts this summer when necessary. 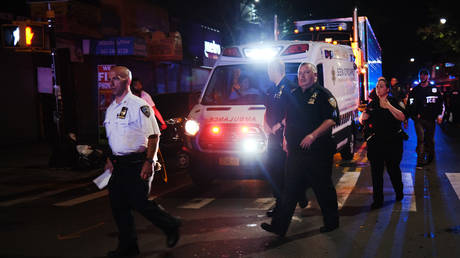