TikTok violates children’s privacy & feeds them with Nazi memes, media and NGOs wail – just in time to justify US ban

TikTok has failed to protect children’s privacy and can’t even keep them safe from froth-mouthed Nazis, US NGOs and media have declared, just in time to give Washington a reason to ban the popular Chinese-made app.

The US Federal Trade Commission and Justice Department are reportedly probing accusations that TikTok failed to protect children’s privacy in keeping with a 2019 agreement, according to representatives of tech policy groups whose anti-Tiktok grievances neatly coincide with Secretary of State Mike Pompeo’s hints earlier this week that Washington is seeking to ban the wildly popular micro-vlogging platform.

“I got the sense…that they are looking into the assertions that we raised in our complaint,” David Monahan of the Campaign for a Commercial-Free Childhood told Reuters on Tuesday, citing a conference call with FTC and Justice Department officials. The group has been pleading with the FTC to look into its claims that TikTok failed to delete videos and personal information about users under 13, who form a protected class in US internet law for whom the Panopticon-like tracking leveled against adult users of social media platforms is not permitted.

TikTok has contested the allegations, insisting it “accommodate[s] users under 13 in a limited app experience that introduces additional safety and privacy protections designed specifically for a younger audience.”

But that special treatment didn’t spare them the blame when a “sickening anti-Semitic song” that (among other things) flippantly referenced “shower time” at the notorious concentration camp Auschwitz went viral on the platform. Accusing the site’s algorithm of “ensuring that video got more than six million views,” the BBC acknowledged that the videos were removed in about eight hours – but not before attracting a large audience.

“TikTok has a particular obligation to tackle this content fast because it specializes in delivering viral videos to children and young adults when they are most vulnerable,” Campaign Against Antisemitism director of investigations and enforcement Stephen Silverman proclaimed, calling the platform “one of the fastest vectors for transmission of memes mocking the Holocaust.”

However, even the BBC admitted that a nearly-identical version of the viral clip was uploaded to YouTube five years ago, racking up 67,000 views before being yanked – and then only because the BBC had brought it to the platform’s attention.

Facebook, too, has recently come under fire by the Anti-Defamation League and other speech-policing groups for allegedly permitting hate speech on its (notoriously pro-censorship) servers, with hundreds of advertisers temporarily pulling their purchases in order to bend the multibillion-dollar megacorporation to their will. While Facebook promised to require users to provide proof they were over 13 in 2018, that pledge was only made after the social media behemoth was caught instructing third party reviewers to ignore users who appeared to be under that age.

Facebook has long been accused of slurping up children’s data and exploiting their lack of understanding of pay-to-play on-platform gaming, having been the subject of lawsuits by parents of children who unwittingly racked up thousands of dollars in charges while playing games funded by their parents’ credit cards. The platform notoriously labeled the latter phenomenon “friendly fraud,” only taking steps to stop it after the eruption of popular outrage. Twitter, too, has been repeatedly caught sharing user data without permission.

We need to ban Tiktok! It steals your private info and gives it to the Chinese and the highest bidder!

But unlike TikTok, those platforms are considered wholesome American tentacles of the surveillance state, and thus mostly get a pass from US authorities. Even after Facebook violated an FTC consent decree, sharing user data without consent despite promising to stop doing so, it only incurred a $5 billion fine – chump change for one of the most valuable tech firms in the world.

The “cancel Tiktok” effort has inspired some rather bizarre takes, such as Florida congressional candidate KW Miller’s suggestion that Congress subpoena New York Rep. Alexandria Ocasio-Cortez “and her merry band of KPOP operatives” for “conspiring with a foreign power to undermine an election.”

Conspiring with a foreign power to undermine an election is known as treason.

So why are the feckless hacks in Congress not subpoenaing @AOC and her merry band of KPOP operatives to testify?

She ADMITTED to conspiring with KPOP agents on TikTok and no one bats an eye. 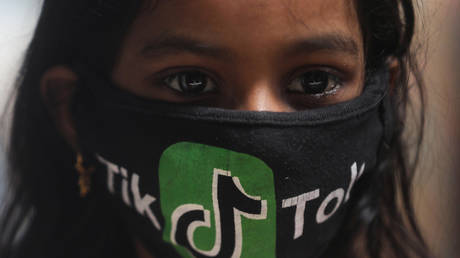