Breaking News
Home » World » ‘Too many books… that are never fact-checked’: White House furious as media give book by Trump’s niece instant credibility

‘Too many books… that are never fact-checked’: White House furious as media give book by Trump’s niece instant credibility

The US media are just too eager to accept any ‘fiction’ at face value as long as it is critical of the president, his adviser Kellyanne Conway said as a new damning book about Donald Trump by his niece got instant traction.

‘Too Much and Never Enough’ – a book Mary L. Trump, a psychologist and a daughter of the president’s late brother Fred – is scheduled to be published next week. Excerpts promising its readers to reveal how the Trump family “created the world’s most dangerous man” have already captivated the attention of the American media.

Since a copy has been obtained by AP, the likes of the New York Times, ABC and CNN have been sparing no effort in savoring the president’s alleged flaws and faults brought to light by the author, be it his alleged racism, “penchant for division” or a claim that he cheated on his SATs, tests widely used for college admission.

The White House response was not long in coming as the president’s pollster and aide Conway castigated the media over their penchant for imbuing what she called “fiction within a work of fiction” with “instant credibility” as long as it is harmful to Trump.

“I think reporters ought to focus on getting the story and not the president,” she said.
“There are too many books out there that are never fact checked.”

The story about Trump allegedly making another person to take his SATs for him has already taken Twitter by storm, sparking a flurry of comments from various public figures ranging from sarcastic mockery to damning criticism. The narrative has been apparently readily taken for granted, even though it has not been corroborated by any other sources so far.

Is this the Joe whom Mary said cheated for Donald on the SAT?https://t.co/RkpNR5rDnp pic.twitter.com/QMeh2S1hfu

Yet, some people rushed to substantiate Mary Trump’s claims with their own observations, while CNN political analyst and former Bill Clinton spokesman Joe Lockhart even suggested creating a “fund” for the person, who supposedly took the test for Trump, calling on this person to “come forward now and do a public service.”

I’ll start the fund. 10k for the kid who took the SAT’s for Trump. Everyone will give, you’ll be set for life. Come forward now and do a public service. It will clear your conscience and fill up your bank account. Retweet with what you can contribute. #SATGUY

Mary Trump’s book comes just weeks after a juicy memoir by former national security adviser John Bolton, which was just as scathing and also sparked a spike of anti-Trump frenzy. Some of the statements made in it were later debunked by other US officials. Trump’s critics never let themselves to be unsettled by this fact and moved on to the next bombshell, in this case by the disgruntled niece. 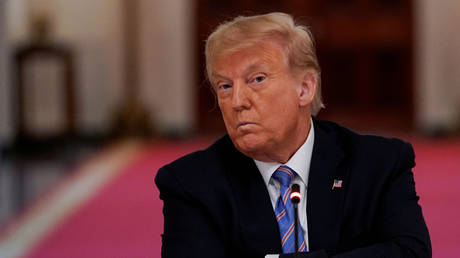