Calling him a “wacko” and a “liar,” President Donald Trump has mockingly defended his decision to hire warhawk adviser John Bolton, who recently unleashed a tirade of criticism at his old boss in a tell-all book.

“I gave John Bolton, who was incapable of being Senate confirmed because he was considered a wacko, and was not liked, a chance,” Trump tweeted on Monday.

“I always like hearing differing points of view,” he added, before issuing a damning appraisal of the former national security advisor’s time in the administration, whom he called an incompetent “liar.”

I gave John Bolton, who was incapable of being Senate confirmed because he was considered a wacko, and was not liked, a chance. I always like hearing differing points of view. He turned out to be grossly incompetent, and a liar. See judge’s opinion. CLASSIFIED INFORMATION!!!

Bolton certainly did bring an alternate view to the Trump administration, one that clashed with the president’s campaign-trail promises to extricate the US from foreign wars and put “America first.” During his tenure, Bolton lobbied the president for military action against Iran, and Venezuela, and sabotaged denuclearization talks with North Korea – either deliberately or accidentally – by suggesting on television that Kim Jong-un give up his nuclear weapons following the “Libyan model.”

“If I listened to him, we would be in World War Six by now,” Trump joked earlier this year.

However, the latest spat between Trump and Bolton stems from the mustachioed neoconservative’s latest book, detailing his time in Trump’s cabinet. In excerpts leaked to the press, Bolton claimed to have first hand knowledge that Trump withheld aid to Ukraine in exchange for an investigation into Joe Biden, and interfered with numerous Justice Department investigations. Bizarrely, Bolton also called Trump’s decision to call off retaliatory strikes on Iran following the downing of an American drone last July “the most irrational thing I ever witnessed any president do.”

Got my hands on Bolton’s book. Not planning to read the whole thing (although the writing seems lively). Here is one of the passages I was interested in. Sheer insanity pic.twitter.com/K45edMSUPG

Since the book’s release, Trump has argued that it contains classified information and as such violates the law. A federal court ruled last week that the book may be released, but noted that “without securing final approval from national intelligence authorities,” Bolton may have caused “irreparable harm” to national security.

“He likes dropping bombs on people, and killing them. Now he will have bombs dropped on him!” Trump quipped after the court decision. 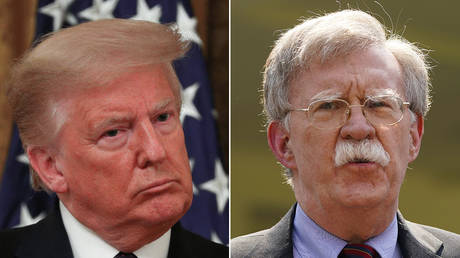