US President Donald Trump has warned of harsh consequences for anyone defacing statues or monuments in Washington, DC, saying the vandals could spend up to a decade in prison.

“Numerous people arrested in DC for the disgraceful vandalism, in Lafayette Park, of the magnificent Statue of Andrew Jackson, in addition to the exterior defacing of St. John’s Church across the street,” Trump tweeted on Monday night, after several protests erupted in the city.

10 years in prison under the Veteran’s Memorial Preservation Act. Beware!

Numerous people arrested in D.C. for the disgraceful vandalism, in Lafayette Park, of the magnificent Statue of Andrew Jackson, in addition to the exterior defacing of St. John’s Church across the street. 10 years in prison under the Veteran’s Memorial Preservation Act. Beware!

Demonstrators gathered in Lafayette Park near the White House earlier on Monday, attempting to topple the Jackson statue and vandalizing the historic St. John’s Church with graffiti. Police reinforcements were sent in to protect both locations, with videos shared online showing clashes between protesters and law enforcement.

Fights breaking out between police and protesters in DC after they were prevented from tearing down the statue of President Andrew Jacksonpic.twitter.com/91G6bPi6P4

Clashes with Police in front of Andrew Jackson statue pic.twitter.com/VwZqdORdex

Pepper spray and maybe what sounds like rubber bullets outside White House as rioters attempt to tear down Andrew Jackson statue. pic.twitter.com/EzOGCNUnMy

A number of arrests were made amid the skirmishes, as was also seen in footage from the protests.

The only thing trending about the protest at the White House is that they tried to take down the statue of Andrew Jackson.

THAT‘S NOT THE STORY

Police are assaulting protesters, and Trump has asked the press to leave. THAT’S THE STORY.

Inspired by a similar effort in Seattle, activists also tried to establish a new protester encampment – dubbed the “Black House Autonomous Zone” (BHAZ) – less than two miles away from the White House. The nascent zone’s initials were seen spray painted on the exterior of the St. John’s Church, where the DC Metro Police have set up a perimeter to prevent further vandalism. 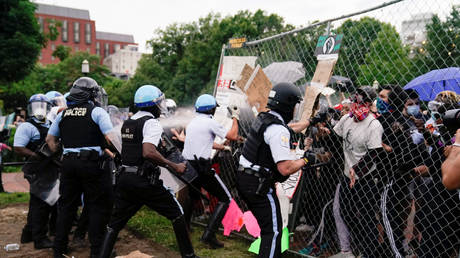