Trump warns of ‘RIGGED’ election, claims millions of mail-in ballots will be forged by foreign powers

The upcoming presidential election will be the scandal of the century, Donald Trump has predicted, stating that the use of mail-in ballots opens the door to widespread vote fraud as well as foreign meddling.

In one of his signature all-caps tweets, the US leader expressed his concerns about November’s contest against Democrat Joe Biden.

“RIGGED 2020 ELECTION: MILLIONS OF MAIL-IN BALLOTS WILL BE PRINTED BY FOREIGN COUNTRIES, AND OTHERS. IT WILL BE THE SCANDAL OF OUR TIMES!” shrieked Trump’s tweet.

RIGGED 2020 ELECTION: MILLIONS OF MAIL-IN BALLOTS WILL BE PRINTED BY FOREIGN COUNTRIES, AND OTHERS. IT WILL BE THE SCANDAL OF OUR TIMES!

His alarming comments come amid a roller-coaster campaign season which has been peppered with incendiary accusations from both parties.

Earlier this month, Joe Biden expressed “great concern” that the president would try to steal the 2020 election, and might even refuse to vacate the White House should he lose.

Trump has been railing against the purported dangers of mail-in ballots for weeks. In May, he claimed that remote voting would lead to “cheating, forgery and theft of ballots.” His message was later “fact-checked” by Twitter, prompting the president to accuse the tech giant of doing some election meddling of its own.

Democrats have pressed for mail-in ballots, describing them as a safe alternative amid the coronavirus pandemic. In a recent interview, Attorney General William Barr argued that such provisions “open the floodgates to fraud” and could even deny Americans the right to a secret ballot since they would have to put their name on the envelope when they mail their ballots. 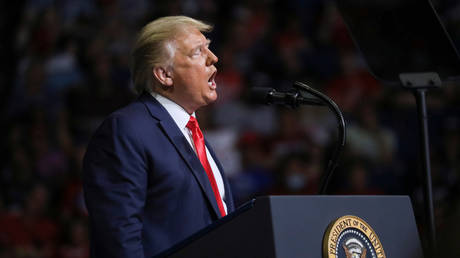