A sergeant based in south-west England is facing a criminal investigation after being suspended for sharing an inappropriate meme of George Floyd with other officers in a WhatsApp group.

A Devon and Cornwall Police sergeant has been taken off duties while an inquiry looks at the circumstances around the image – allegedly shared on May 30, five days after the death of the 46-year-old black American in Minneapolis, Minnesota after a white law enforcement officer kneeled on his neck for nearly nine minutes.

The Independent Office for Police Conduct (IOPC) announced on Monday that they had begun criminal proceedings, with the watchdog saying “It will be of considerable public concern that such an image was apparently shared among colleagues by a serving police officer.”

Our investigators will be considering whether the sharing of this image was motivated by racial discrimination.

IOPC Regional Director Catrin Evans added that the watchdog is also “examining the conduct” of a number of other police officers and staff members for their alleged response or apparent failure to report the matter.

The probe follows a mandatory referral from Devon and Cornwall Police after one of the WhatsApp group members reported the image to their force manager.
The death of Floyd in police custody sparked global protests and riots around the world, including Britain.

Clashes between protesters, led by the Black Lives Matter movement, counter-protesters and police were seen outside Downing Street, with iconic statues such as that of Winston Churchill also targeted. 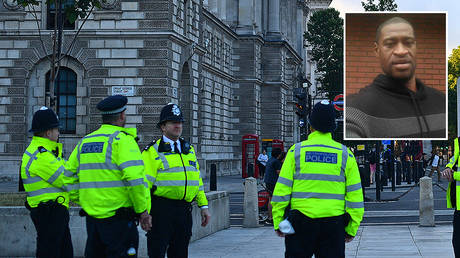