The US State Department has reclassified four Chinese news outlets as “foreign missions,” declaring them “propaganda outlets” and imposing strict controls on their ability to employ journalists and conduct business in the US.

Chinese outlets Global Times, China Central Television, China News Service, and People’s Daily have joined a growing list of state-run outlets subjected to intensified scrutiny as the media war between Beijing and Washington heats up. State Department spokeswoman Morgan Ortagus announced the additions on Monday, proclaiming the named organizations are “effectively controlled by the government of the People’s Republic of China.”

“These four outlets are not media outlets; they are propaganda outlets,” David Stilwell, the ranking US diplomat for East Asia, informed reporters.

The four media organizations will be required to report details about their employees and real estate transactions to the State Department, though it was not immediately clear if they will be required to cut staff. The five Chinese media outlets initially reclassified as foreign missions earlier this year were required to dismiss nearly half the Chinese nationals on their staff, according to AFP.

China retaliated at the time by booting American reporters for the Wall Street Journal, New York Times, and Washington Post, calling out the “oppression” of its reporters by a nation that promotes itself as a bastion of press freedom. While journalistic advocacy group Reporters Without Borders has praised the US citizens kicked out of China for bravely reporting in the face of adversity, it has been noticeably silent regarding the Chinese journalists unceremoniously thrown out of the US.

The media war between the two countries was kicked off in the midst of the coronavirus epidemic when the Wall Street Journal published an op-ed whose title – “China is the Real Sick Man of Asia” – Beijing perceived as racist. Coming on the heels of a series of allegedly Sinophobic articles by western outlets, the piece represented the last straw for China, which reacted by informing three WSJ reporters they had five days to pack their bags and leave the country. The back-and-forth has only escalated since, exacerbated by the countries’ dispute over the origins of the coronavirus pandemic and the ongoing trade war. 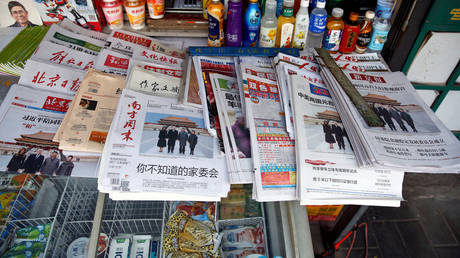