‘We’ll see’: Ahead of ‘national vote’ on changes to constitution Putin doesn’t rule out running for 5th presidential term

Vladimir Putin may well remain in the Kremlin beyond 2024. The Russian President told federal television on Sunday that he hasn’t decided on whether he will put his name forward for election again or leave frontline politics.

A constitutional amendments package, to be put to a public vote that concludes on July 1, would give him the option of running for Russia’s highest office on two more occasions. In Sunday’s TV interview he avoided giving an affirmative answer – but did not rule out such a possibility either.

We’ll see. I have not decided anything for myself yet.

The president also refused to say whether he had considered finding himself a ‘successor’, explaining that it would only disrupt the government’s work. Everyone in the government, as well as on other levels in the state administration “must work [in the now] instead of searching for successors,” he stressed.

Under the current rules, Putin – who has been president for 16 of the past 20 years – is not permitted to run for office again in the 2024 election. That situation would change if the constitutional amendments package is passed.

The revised constitution would see more powers transferred to the country’s parliament (the State Duma) and the Federation Council, ban important officials from having foreign citizenships and restrict all future presidents’ time in office to two terms in total, among other tweaks.

At the same time, the package contains a provision that would ‘nullify’ the terms of the sitting president – allowing Putin to run for two more Kremlin stints, in theory.

The nationwide vote on constitutional amendments was initially expected to take place on April 22, but it was postponed due to the coronavirus situation. The poll will now begin on June 25 and last until July 1, which has been declared a non-working day to facilitate the voting. 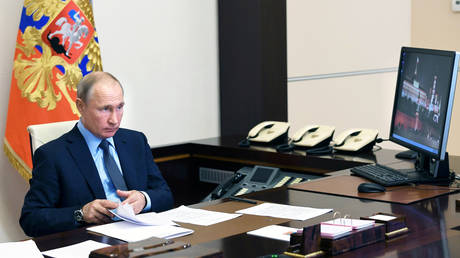