Where’s the money? Election watchers wonder if Bloomberg will follow through on $1 BILLION spend pledge to help Dems defeat Trump

During his presidential run, Michael Bloomberg promised to spend up to $1 billion to help the Democrats unseat Donald Trump. As the election closes in, even the former mayor’s supporters wonder if he’s going to pay up.

Bloomberg originally made the pledge back in January, while he was still vying to become the Democratic Party’s 2020 candidate. He added that the end sum handed over would depend on “whether the candidate needs help; if they’re doing very well, they need less. If they’re not, they’ll need more.”

Although he spent around $1 billion during his short-lived primary campaign, as of May Bloomberg was not averse to the idea of giving more money to Joe Biden, who ended up becoming the presumptive nominee.

Aside from the $18 million of his failed campaign’s budget leftovers that were transferred directly to the Democratic National Committee, Bloomberg’s promised funds are nowhere to be seen, however. With the presidential election coming up in November, concerns have intensified.

The Dude is the Democratic Party, Jeffrey Lebowski is Bloomberg, and the empty briefcase is his billion dollar expenditure.

Journalist Jonathan Chait, a long time Bloomberg supporter, tweeted about his disappointment with Bloomberg with a reference to the cult film ‘The Big Lebowski,’ in which the main character struggles to repay a debt owed by a multi-millionaire.

Bloomberg and Chait is the worst buddy movie pic.twitter.com/8uNM6X1nPt

— Every cliché plane is an adjective (@KindAndUnblind) July 7, 2020

Chait’s earnest dismay at Bloomberg’s inaction on his promises sparked a free-for-all between journalists in his replies.

One of the most common reactions was obviously cynicism, with some suggesting that the promise was made without any intent to act on it. Podcaster Will Menaker even compared the journalists’ dismay at Bloomberg to the story about Tom Sawyer, where the boy tricks gullible children into doing his chores.

Others initially distrusted Bloomberg’s generosity, aimed at defeating the sitting president, adding they felt “it had nothing to do with Trump, it was about stopping Bernie [Sanders].”

Sanders, a Vermont senator and two-time failed contender for the Democrat nomination, did in fact catch some flack from the media, including Chait, when he announced he would refuse to take Bloomberg’s money should he win.

Bernie is so principled he won’t let Bloomberg spend a billion dollars registering voters and attacking Trump to help him. Democrats should be scared. https://t.co/agp57oLTPQ

It had nothing to do with Trump, it was about stopping Bernie.

Not everyone was quick to dismiss whatever credibility the former mayor of New York City might have, however. Some kept their faith in the media mogul, rationalizing that he may be “waiting until later in the election season” to pay up.

Is he maybe waiting until later in the election season? Biden’s up in every battleground state so maybe Mike is looking for tactical spending in September? 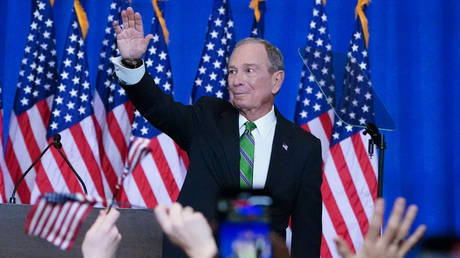