You became RACIST yourself, users tell Reddit as it issues (& removes) ban on content portraying ‘people of color’ as ‘aggressors’

The policy update was posted by Reddit’s AutoModerator bot, which intervened in a conversation on the JusticeServed channel.

“We can no longer allow any posts, comments, or other content that shows a POC [person of color] as the aggressor,” the publication warned. Corresponding videos, news and personal stories, photos, police reports, and “any other form of media” will be considered “hate speech and/or harassment.”

The announcement itself then disappeared from Reddit. It is nowhere to be found on JusticeServed and other accounts, but still available on the web archive.

The policing announcement did not sit well with commenters who flooded the Reddit thread with angry replies, many bashing the platform for becoming what it says it is fighting against.

“In your pursuit of anti-racism, you’ve managed to become racists yourselves,” one person said, while others called the policy “reverse racism.”

Not surprisingly, some found the blacklisting announcement to be rather Orwellian. “Is this satire? It has got to be right? Literally big brother didn’t go to this extent,” a Reddit user wrote.

“We can tell our kids we remember a time when they started shutting down the truth,” another said.

Some enraged netizens called on everyone to stop using the “sinking ship” Reddit and migrate to alternative platforms.

Reddit has been on a crusade against ‘hateful’ content in recent weeks, amid the waves of protests against racism sparked by the death of George Floyd. It wiped out multiple accounts, among them the subreddit ‘The_Donald’, believed to be the most popular community of Donald Trump supporters.

The website’s executives accused the group of targeting and harassing individuals and repeatedly breaking its rules of conduct. Some, including YouTuber and managing editor of Human Events Ian Miles Cheong, said the company was using the mass ban to cover up a bias against the community of Trump supporters. 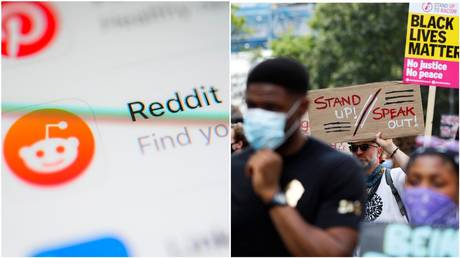